A is for Anne: Mistress Hutchinson Disturbs the Commonwealth, Poems by Penelope Scambly Schott 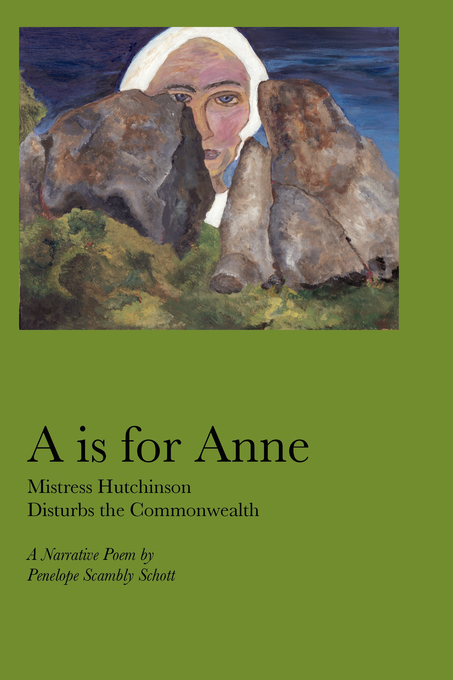 This engrossing collection of poems explores the life of Anne Hutchinson, the dissident Puritan thinker and speaker who played a pivotal role in the emergence of American religious freedom. The multiplicity of voices and Schott's varied techniques create a nuanced, unforgettable portrait of its subject.

“In this imagined recreation of the inner life of the colonial heretic Anne Hutchinson, Penelope Scambly Schott helps resuscitate one of the most important women in the history of civil rights and religion in America.”—Eve LaPlante, author of American Jezebel, The Uncommon Life of Anne Hutchinson, the Woman Who Defied the Puritans (Harper/San Francisco, 2004)

“Meticulously researched, marvelously rendered, A is for Anne: Mistress Hutchinson Disturbs the Commonwealth is biography written with the flame of poetry. Anne Hutchinson grapples with injustice and confining religious conformity. This wonderful book is as much a parable for our own frightened and frightening times as a depiction of a period blurred by the mists of history.”—Robert Cooperman, author of The Long Black Veil (Higganum Hill Books, 2006)

Penelope Scambly Schott, a long-time New Jersey poet, now lives in Portland, Oregon with her husband and their dog. She has published a novel, A Little Ignorance; two collections of poetry, The Perfect Mother and Baiting the Void; and two previous narrative poems, Penelope: The Story of the Half-Scalped Woman and The Pest Maiden: A Story of Lobotomy (also from Turning Point). She has received four New Jersey poetry fellowships, a senior fellowship at the Fine Arts Work Center, a Dodge Fellowship to the Vermont Studio Center, and a residency at the Wurlitzer Foundation in Taos, New Mexico. She expects to release a new collection, May the Generations Die in the Right Order, in Fall 2007.