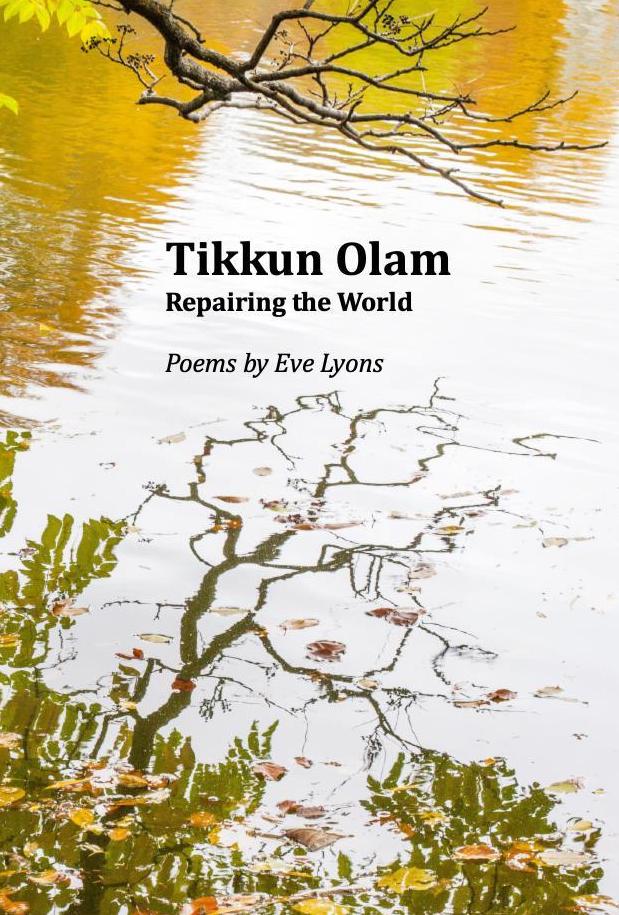 Day by day, step by step, Eve Lyons' poems are a journey toward what is essential and enduring, to what can be of use.

"The world is broken. While we tend to think of our brokenness as new or more acute now than in historical times, a look at ancient texts and news reels remind us otherwise. Eve Lyons's first book of poetry, Tilkkun Olam: Repairing the World, asks readers to study the world today without forgetting our ancestors, without abandoning our spiritual natures, and without flinching. It is a tall order, and yet, by guiding us on a journey with her finely-crafted poems, Lyons manages to make it seem possible. She weaves together human rituals and poetic forms to reveal what it means to be Jewish in America today, what it means to listen to people aching in a therapist's office, and how we can conceivably tend to the broken among us with love and compassion.

The beauty of this book is that Lyons manages to show us simultaneously our damaged natures and our capacity for caring for those who have been damaged. Without ever moving into didactic homilies, these poems ponder scientific theories and the geographies of our lives; they explore the range of human emotions, from anger and adoration to isolation and laughter. They also ask us to reflect on the benefits of ritual and religion in a world where religion sometimes harms more than it helps. With exquisite grace, these poems ask us to consider what it means to be reverent listeners in a society that moves quickly from one fad to the next. Tilkkun Olam is built with crisp images and fresh metaphors that are of the physical world; Lyons's poetry is rooted in real times and places, riveting readers into new spaces, both spiritual and intellectual, where might begin to heal."-Katherine Perry

"Eve Lyons' poems are strong, passionate and direct. She writes out of a deep and critically examined Jewish heritage but her work is accessible to people of any or no faith. She writes well of love, of doubt, of her work as a therapist, her travels and politics, her friends and acquaintances. Some of these poems do what the best do: stay in your mind."-Marge Piercy

"Ranging from San Antonio to Oregon to Israel and Massachusetts, Eve Lyons' poems are more than an attempt to find home while in exile, as they express grief, anger, love, solace, and, yes, faith even during times of terror and loss. There is stark honesty here, and wisdom, in clear, vivid language that can help keep us all going."-Wendy Barker, author of One Blackbird at a Time

"I could tell you about how beautifully Eve's poems weave the personal and political, tackling issues of spiritually and secular life with equal aplomb. But what I really want to stress is this: as someone who resides firmly in the world of first-person storytelling, I often read poems and want for narrative. Not so in this case, as these poems feel like short films, rich with character, detail and conflict. It's a collection that forces the reader to confront the unrest and inequity of the world, while also offering up a sense of hopefulness by reminding us that we can be more than witnesses to injustice; that we can be agents of change. It's a message the world needs now."-David Crabb (author of Bad Kid, host of RISK!/The Moth)