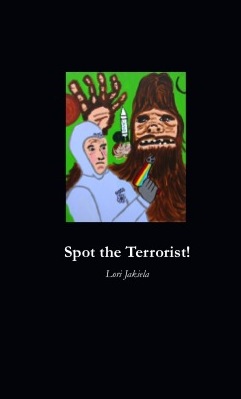 Lori Jakiela's Spot the Terrorist! takes the reader on flights through the ordinary, in which the mundane experiences of an airline attendant become something much stranger and wilder.

"Workers in the air, workers in the mills, the homes they can't escape, the motels they touch down in. Lori Jakiela understands the rhythms at the intersection of humor and sorrow. Each time I finished one of these poems-populated as they are with delightful, sometimes delightfully appalling, characters-I was eager to begin the next, for more news of the human." - Daisy Fried, author of My Brother is Getting Arrested Again and more

"Filled with rich evocative scenes and poignant, nuanced characters, these poems artfully depict the sadly relatable travails of air travel with the humor and wit of a survivor of today's tattered airline industry." - Steven Slater, former flight attendant and current folk hero who made news when he quit his job at Jet Blue, jettisoned an emergency slide, took two beers and jumped

"Work, like love, endures our endless scrutiny, and then we turn away to dream, and make our way back maybe seasoned and ready for what comes. Lori Jakiela's narratives conduct Jimenez's 'relentless investigations' of the fear culture and the depletions of brutal American wage-numb, even in the once elegant world of transatlantic flight. What makes this collection resonate, though, is Jakiela's silver-hot radar of desire: for song and beauty, always, and for the authentic promise of her beloved home- places."-Judith Vollmer, author of The Water Books

Lori Jakiela is the author of the memoir Miss New York Has Everything (Warner/Hatchette 2006) and three poetry chapbooks. She was a flight attendant for Delta Air Lines for six years. She lives outside of Pittsburgh and teaches in the writing programs at The University of Pittsburgh-Greensburg and Chatham University.