Delusion of Grandeur, A Poem by Carol Hebald 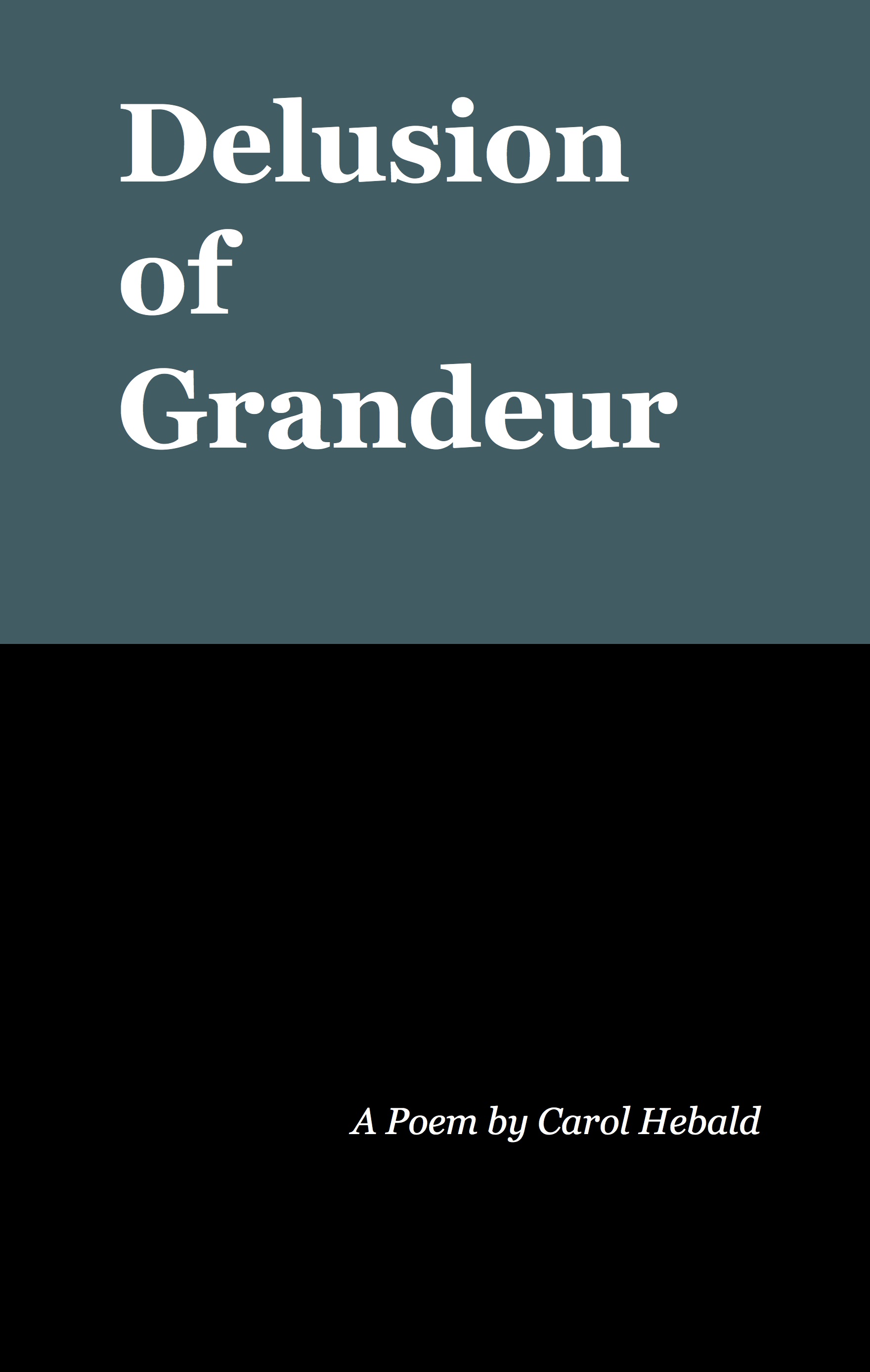 A comedic fantasy in three cantos, Delusion of Grandeur concerns the current incarnation of the offspring of Mary, Mother of God, and the Prince of Darkness: She is The Fat Lady at Coney Island Zoo. Victim of a senseless shooting in her cage, she wakes the following morning in the vestibule of heaven. Unaware of her identity, she is certain she's been sent to the wrong place. Yenta Angel, the bookkeeper who tries to draw her out, receives news that some poets are storming the Tower of Babel with words; they are rallying for a universal language to abolish misunderstanding. No sooner do their words turn to stones, than an escalating quarrel between the poets and clergy about the crises on earth brings heaven to the brink of war. With God aroused from a nap, and Fat Lady's identity revealed as the elder half- sister of Jesus, the action culminates in a symbolic marriage uniting all racial and religious denominations.

"In this ambitious 'long poem for voices,' the all-too-human figures of God ('asleep since the Holocaust'), Christ, Lucifer (aka, the Gentleman/Stranger), St. Mary and various angels, saints, thinkers, and poets contend in a complex personal theology tinged with ethnic humor. But central, perhaps, is the Fat Lady/JoanMarie-Hell-born daughter of Lucifer and St. Mary and the reborn Heavenly sister/bride of Christ. And so it is that the poem movingly desires compassion and rebirth. In the present, an awakened God returns Christ to Earth ('full of war, / famine and disease') and grants Lucifer a thousand-year penance chained to the statues of Adam and Eve in Heaven's 'mock Garden of Eden.' And JoanMarie, herself, voices such desire when she invokes the biblical heroine-wife and sister of Abraham-whose marital state, if not its outcome, so resembles her own: Life was greater than death,/hope than despair,/ when Sarah, across the centuries, conceived."-Hugh Seidman

"I am won over by Hebald's poetry, the music of the rhymes, the erudition and literary heft, given levity by the author's wit, high humor, and Shakespearean zest. I especially like the comic touch of Lucifer as a denizen of heaven in sunglasses and raincoat. This original work is a dazzler."-Colette Inez

"I have long admired the work of Carol Hebald in several genres of her creativity- her powerful memoir of suffering and recovery from mental illness, The Heart Too Long Suppressed, her beautiful poems in Spinster by the Sea and Little Monologs, and her play, Martha. Her book-length poem, Delusion of Grandeur, reminds me of a seriously comedic medieval morality play. It is awesome, hugely enjoyable, and wonderfully subversive. A monologue in it ascribed to God about dozing off when he is desperately needed to save the Jews from the Holocaust will remain permanently in my memory."-David Ray