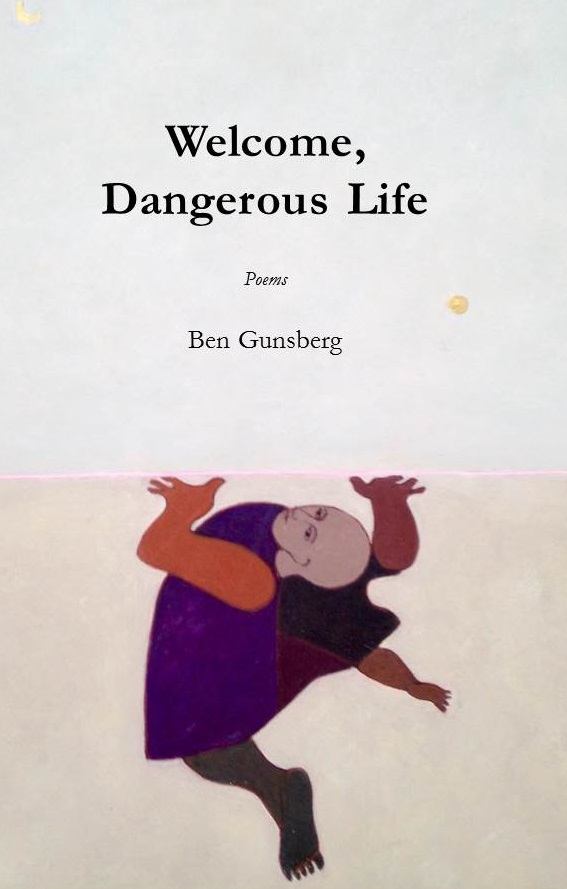 Ben Gunsberg's Welcome, Dangerous Life enters the plentiful light and dense shadows of American culture to bring good news: you can endure it. Here are rhapsodies, sonnets, anecdotes, and experiments that ride out the rough spots of romance, parenting, work, and illness, poems that bear witness to the day-to-day struggle while remaining exuberant, playful, and wise.

"The poems in this terrific debut come in many forms: rhapsodies, fairy tales, self-portraits, and meditations on everything from the big subjects-love and death-to the everyday, intimate encounters that round out a life: the 'fitness rope / slung from [a] high school gym,' the 'brown lament' of turkey gravy, a father burning a wasp nest while his children 'look out from a square pocket of light.' Ben Gunsberg presents a world where endangered bees 'mistake / McDonald's signs for dandelions,' Midwestern volleyball players 'morph into windmills,' and art appears in all its forms-from silly putty to Stradivarius, heroic music to hoedowns. Most of all, this book perfectly captures the peculiar experience of raising children, even as our own childhoods loom in the background, and reminds us there are no ordinary moments in our beautiful, dangerous existences."-Mark Neely, author of Beasts of the Hill and Dirty Bomb

"Ben Gunsberg's formally exquisite and emotionally nuanced work reminds us that poems can both delight and make strange. Whether writing an elegy for a shuttered Kentucky Fried Chicken or exploring the joys and shames of childhood (his own or those of his children), Gunsberg moves across impressively wide registers of craft and feeling. There are poems and moments here that will provoke smiles and laughter (there's a lament for lost Veronica of the Indianapolis Marriott, a rhapsody for real estate) and those that will stop you with their worldly and human poignancy (political graffiti on the world's largest tree, resonances of myth in the midwest, night terrors, a city where 'the air smells like polymers/and rubble.') In the wreckage there's exuberance and wisdom expertly spun into art. Here, life is dangerous. And it's welcome."-Christopher Cokinos, author of Hope Is the Thing with Feathers and The Underneath

Ben Gunsberg was born in Virginia and grew up in the Midwest. He was educated at Miami University (OH), the University of Alabama, and the University of Michigan. His poems have appeared in many literary journals, including Mid-American Review, DIAGRAM, and Tupelo Quarterly Review. He lives in Logan, Utah, where he teaches English at Utah State University. Visit his website at www.bengunsberg.com