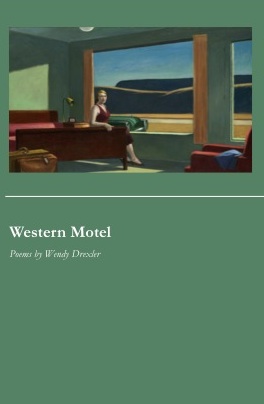 The emotional and physical landscapes in Wendy Drexler's Western Motel are as open and expansive as the West itself, and these poems haunt the spirit.

"Wendy Drexler's Western Motel is a fast-paced road trip across a landscape of Americana: rock concerts, cruise ships, the Bolt Bus, parking lots, nursing homes, bowling alleys, Amtrak trains, diners. At each surprising yet familiar stop the poet invites us to step into the scene; each scene in turn unfolds to draw us further into the picture or send our compass spinning in new directions. There is an inward journey here as well- across the terrain of childhood grief, marriage, divorce, illness, and family life-mediated through the consolations of nature, music, art and love. Like the Hopper epigraph that opens the book, Drexler's wise and inventive poems deftly 'paint sunlight on the side of a house.'"-Lorna Knowles Blake

"Amid so much ordinary, safe, flat poetry these days, it is gratifying to find Wendy Drexler reaching beyond, stretching to capture the makings of a life, and yes, grasping it again and again in artful ways and precise vivid language hammered into poetry on the anvil of her experience."-Michael R. Brown

"First, a look at the imagery in Western Motel, a mature and polished collection: throughout, it stuns because it stretches the membrane between seen and felt. 'To mince into thinness . . .' announces the poem 'Man on a Wire,' a man who will eventually 'threshold the balancing pole like a bride across.' And this kind of acute vision illuminates the minutiae of nature, always in the process of 'meting out life's dry measure' for survival. Further, the wild juxtapositions, especially in the poem 'In the Kitchen' where the narrator peels cucumber and weeps about the Holocaust, create shock and admiration. But there are many such poems that balance the quotidian with cosmic interiors-a man tossing his bowling ball down the alley 'releases his quiver of sorrow. . . .' From a long poem about childhood in Colorado to the gates of Theresienstadt, the geography of pain both historical and personal is explored".- Suzanne E. Berger