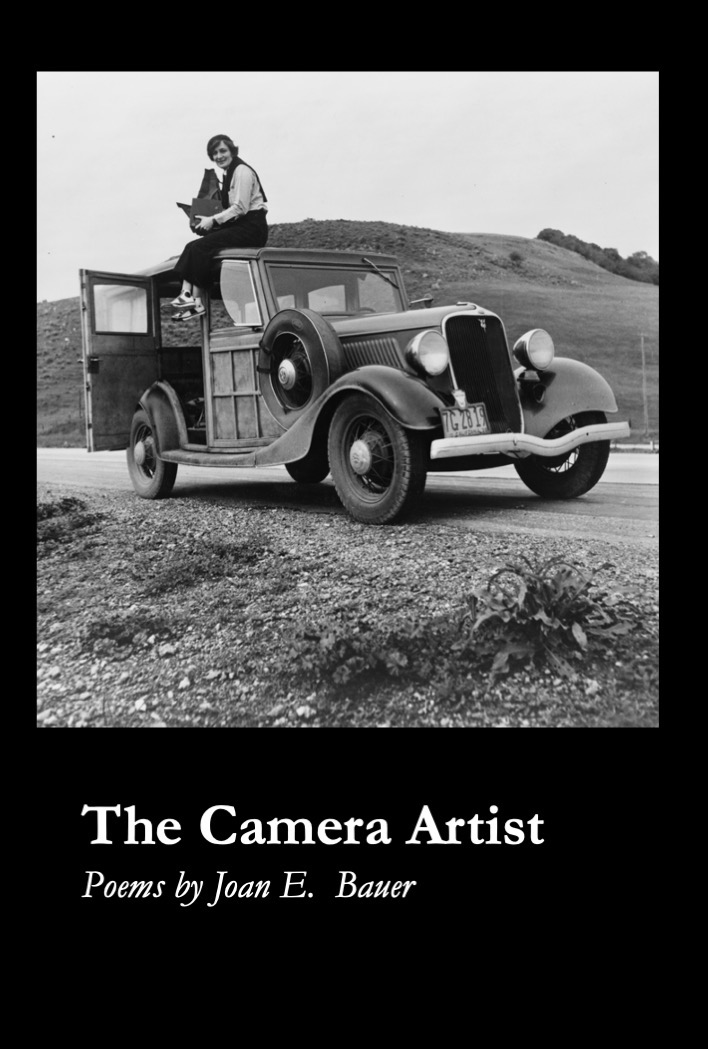 In The Camera Artist, the poet Joan E. Bauer looks back at major events and movements of the past century through the lens of "camera artists" like Dorothea Lange, Diane Arbus, Roy DeCarava, Sally Mann, Toyo Miyatake and Cindy Sherman, among others. This collection was largely inspired by the words of documentary photographer Robert Frank, "It is important to see what is invisible to others."

"The Camera Artist by Joan E. Bauer poses the large question: What is the frame of history, and how do we see it? In the construction of these detail-rich poems, Bauer adds another layer to the question: How does the seer determine the sight? The Camera Artist pays homage to great photographers, from Margaret Bourke-White to Diane Arbus, from Dorothea Lange to W. Eugene Smith. With the context of Los Angeles and New York as background, with Václav Havel and Angela Davis in the picture, these poems bring up poignant questions of borders and loss: Where does the frame end, how to document what has passed from our lives without fixing it in one moment of story, even if that moment exudes depth and history? Bauer's wealth of information breathes fully in these poems of edge and image, in the personal stories of photographs lost in a fire, the love stories grounded in light, in what is seen/what is hidden. A fabulous book!"-Jan Beatty, author of The Body Wars, University of Pittsburgh Press

"Joan E. Bauer fulfills a traditional role that American poets have sometimes neglected: that of the historian-poet who, like Homer, Virgil, and Shakespeare, invokes the past in precise rhythms and rich metaphors, so that we may learn about our own time. She also has a gentle sense of irony, usually directed against herself, comparing for example her own compulsive reading to 'a lizard doing pushups on a stone.' In this new collection, Bauer gives special attention to women photographers, such as Dorothea Lange, Berenice Abbot and Vivian Maier, who, like the poet herself, capture emblematic moments of their eras."-Michael Simms, editor of Vox Populi: A Public Sphere for Poetry, Politics and Nature

"There is a reason that Joan E. Bauer is one of my favorite American poets; her lyrical, informative, ambitious, political, and deeply, almost impossibly beautiful imagery is on a par with Robert Lowell at his very best. And in The Camera Artist, Bauer's choice of subjects-among them Diane Arbus, Cindy Sherman, Angela Davis, Frida Kahlo, and Saul Leiter-enables her to provide what amounts to a poetic history of 20th Century America, not unlike what Lev Ozerov did for 20th Century Russian art in Portraits Without Frames . In short, Bauer's ability to inspire the reader to rethink a subject or person that has already been a significant part of one's own consciousness is unparalleled, and in this collection, as entertaining as it is insightful."-Kareem Tayyar, author of Immigrant Songs and The Prince of Orange County

"'We must make room for other people' insists one of the many photographers who appear in The Camera Artist. That's just what Joan E. Bauer does in her remarkable new book - stepping generously out of the frame to create compelling, multifaceted portraits of artists, activists, feisty outsiders, family members, and more. This is Bauer's great gift to us. It's also the heart of her moral vision - so clear-eyed and deeply humane." - Richard St. John, author of Each Perfected Name

Joan E. Bauer is the author of The Almost Sound of Drowning (Main Street Rag, 2008). With Judith Robinson and Sankar Roy, she co-edited the international anthology, Only the Sea Keeps: Poetry of the Tsunami (Bayeux Arts, 2005). In 2007, she won the Earle Birney Poetry Prize from Prism International. For some years, she served as an English teacher and educational counselor in public and independent schools. She now divides her time between Venice, CA and Pittsburgh, PA. where she co-hosts and curates the Hemingway's Summer Poetry Series with Kristofer Collins.